The Moälven River has been intensively used by human during the 19th and 20th centuries and activities such as forestry led to severe ecological degradations. Boulders and larger stones were removed from streambeds to allow log floating thus resulting in a loss of habitat for fish and invertebrates. Furthermore, this logging activity caused the river to break a new course during a severe flood in 1868: a waterfall was created making it impossible to fish to migrate upstream. Besides, acidification caused by airborne pollution and forestry of open water has also been a problem for the conservation of biodiversity in Sweden over the last 50 years. Finally, the urbanization of the river basin also affected fauna such as the otter through the development of improper designs of hazardous road crossings over watercourses. 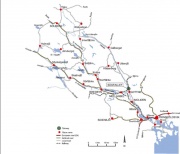 The LIFE project aimed to restore and improve habitats of the river Moälven to pre-industrial conditions in order to protect and to conserve threatened species such as Margaritifera margaritifera, Lutra lutra, Salmo salar and Cottus gobio.

In order to counteract human pressures inflicted upon the ecosystems and improve habitats quality along the Moälven River, the project aimed to:

A broad range of measures was implemented under the frame of the LIFE project since the project foresaw six different specific goals. The measures are introduced below grouped by their related goal. 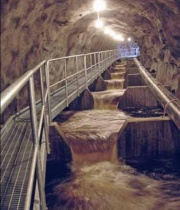 Part of fish way inside tunnel

Success criteria were set before the measures implementation with regards to two specific goals. First of all, a Margaritifera. margaritifera population size of 100 000 individuals was foreseen according to project forecasts and based on pre-restoration surveys. The liming activities also intended to increase the pH to an acceptable level of 6.3 in order to have water quality suitable for Salmo salar, Salmo trutta and Margaritifera. margaritifera reproduction.

Monitoring was carried before and after the implementation of the LIFE project mainly concerning the biotic component of the ecosystem but also regarding to the water quality. The main features of this monitoring are introduced below:

The LIFE project was led by Örnsköldsviks kommun in partnerships with a broad range of organization from private forestry company to fisheries managers, etc. The following organizations were committed to this project: the Swedish Environmental Protection Agency, The Swedish Board of Fisheries, Moälvsfisket, Nature Fund of Örnsköldsvik, Holmen Skog Ltd, the Swedish Forest Agency, the Swedish Road Administration and the County Administrative Board of Västernorrland. Every partner added its knowledge, inputs to project design and implementations. As example, the Swedish Forest Agency was in charge of a large education program of forestry managers.

Forestry managers, private landowners and fisheries managers were involved in the project through trainings. Members of local fishery management organizations were trained in fish habitat restoration in a small watercourse while foresters were informed of the negative effects that forestry could have on aquatic life and how such effects can be avoided. Such trainings will play a key role in future river management along the Moälven River through changes in practices that cannot be evaluated so far.

Besides the improvement of habitats, the LIFE project also aimed to educate and inform people living along the Moälven River. Information concerning the LIFE project has also reached a large public through project website, information boards, pamphlets, signposts with fishing rules and public meetings held at an early stage of the project. Furthermore, the public accessibility of the river were improved by the preparation of new parking-sites and hundreds of signposts with information concerning fishing locations, historical sites and places of large ecological importance.

The LIFE project was completed in 2008. Nevertheless, the restoration continues in the parts of Moälven not affected by the LIFE Nature project. Fish migration barriers especially need to be dealt with and stream habitats need to be restored in Norra and Södra Anundsjöån. Besides, the monitoring of restoration successes is still on going through the evaluation of fish reproduction success, counting of fish using the fish pass, etc.

Despite the success of the restoration measures especially seen through the salmon return, Moälven river managers are now facing a new constraint. Since salmons are back, fishermen interests are growing, which could affect the newly restored population of salmon. Therefore, river managers are currently working on the development of a new fishing regulation that must be adopted by the Swedish National Board of Fisheries.