Effective river restoration calls for an understanding of how rivers work. A key step for this is hydromorphological characterization, looking at rivers from a perspective that discloses the relevant processes and forms. Hydromorphology is a matter of water and sediment, but also of vegetation interacting with water and sediment. This makes both geomorphological and ecological processes relevant.

River management often focuses on individual reaches of river networks. However, the character and dynamism of river reaches depends not only upon natural processes and human interventions within the reach, but also within the catchment, particularly upstream of the reach (see Figure 1). The character of river reaches often responds to processes and interventions across the catchment in a delayed way as changes in processes propagate from their source areas through the river network to individual reaches.

A river is a connected ecosystem generated by hydrological, geomorphological and ecological processes that interact at many temporal and spatial scales. Hydromorphological characterization aims at capturing and explaining this complexity (see River Characterisation). This is the key step in developing a fuller understanding of how a river functions physically, as a foundation for evaluating river conditions and developing a programme of restoration measures.

The spatial organization of rivers and the way how such spatial organization evolves through time create the variety of forms and processes we observe in nature. This builds the theoretical framework (see Multi-scale_Hierarchical_Framework) for characterizing relevant spatial and temporal scales at which key fluvial processes occur.

How are river systems organized in space?

When thinking about a river, we usually imagine a reach of a few kilometres in length. This is the key spatial scale within a framework of spatial components of the river landscape (see Figure 1). For characterizing the full complexity of rivers, however, it is useful to consider components larger and smaller than a reach too. A hierarchical framework for this helps in adopting the relevant spatial scales to describe specific river system characteristics (see The_Framework). 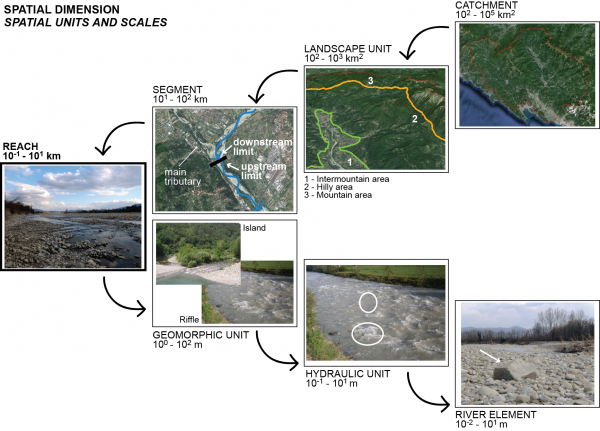 The hierarchical framework proposes eight different sizes of spatial unit (see Hierarchy_of_spatial_units) to investigate different river features. Seven of them are represented in Figure 1. The catchment unit encloses the land that is drained by a river and its tributaries, for which the area is typically 102-105 km2. Landscape units are portions of the catchment that show different forms of physical landscape that can be summarised by properties such as land surface elevation, land steepness, and valley density. They have a typical area of 102-103 km2. The segment unit is a section of the river system that is located within a valley of sufficiently uniform gradient and width, so that the river is confined by its valley to a similar degree and has similar energy through the segment. River segments are typically 101-102 km long.

The reach unit is a section of the river network in which not only the valley and flow energy are relatively uniform, but also other conditions, such as bed sediments, bank properties and riparian vegetation. This uniformity in conditions gives the river reach a consistent appearance through its length as a result of a near-consistent internal set of process-form interactions. A reach unit is typically 10-1-101 km in length, and a river segment can contain one to several reaches.

A geomorphic unit is a portion of a reach that contains a landform created by erosion or deposition of sediment, sometimes in association with vegetation, with a typical length of 100-102 m. Geomorphic units can be located within the channel (bed and mid-channel features), along the channel edges (marginal and bank features) or on the floodplain. A hydraulic unit is a spatially distinct patch of relatively homogeneous surface flow and substrate character with a typical size of 10-1-101 m. A single geomorphic unit can include one to several hydraulic units. River elements include individuals and patches of sediment particles, plants, and wood (10-2-10-1 km). The framework is hierarchical in that each of the spatial units nests within one another so that their boundaries do not overlap.

Each unit represents a particular spatial scale that is suited to investigating specific processes, human pressures and forms that eventually impact on the character and dynamics of river reach units (see Four_stages_of_river_characterization: Stage_1_(Delineation_of_spatial_units) and Stage_2_(Characterising_current_condition)).

Figure 2 lists some examples of indicators of processes, human pressures and forms which can be calculated for each spatial unit (see Stage_3:_Indicators). 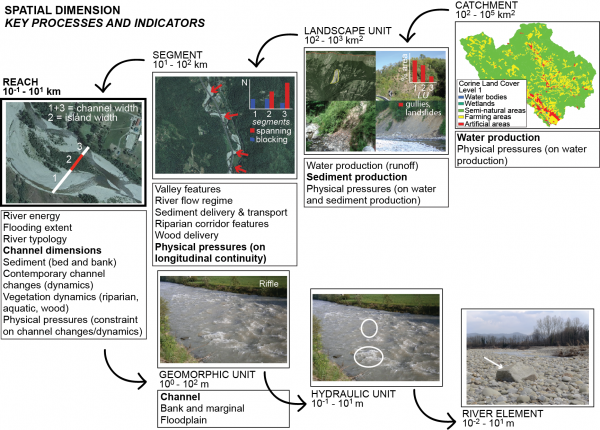 At the catchment scale, for example, it is relevant to monitor land cover type because it affects run-off production. At the landscape unit scale, potential sources of sediment (for instance gullies, landslides) can be located to estimate the likely supply of such sediment to smaller units. The segment scale is suitable to investigate physical pressures altering longitudinal connectivity, riparian corridor features, valley features and river flow regimes. All of these can be assumed to be fairly homogenous at this scale and thus well-represented by summary indicators. At the reach scale, indicators summarising channel dimensions and type, bank and bed sediments, and riparian properties can be represented by informative indicators. Within reach units, geomorphic units such as riffles, bars or islands can be identified and at a finer scale specific hydraulic units and river elements can be surveyed.

It is at the reach scale that the many features found across floodplains and river channels adjust to the cascade of influences that propagate to the reach from larger spatial units and scales. This is also the scale that is affected by interactions and feedbacks within the reach among fluvial processes, geomorphic units, hydraulic units, and smaller river elements such as sediment particles, logs, and plants.

How do river systems develop in time?

The temporal dimension is necessary for a complete characterization of river processes. This adds knowledge about the changes in features and indicators through time within each spatial unit, and so discloses information that helps to explain how changes occur at different spatial scales and dynamically interact between scales (see Stage_2:_Characterising_past_condition). The historical evolution of hydromorphological features and human interventions may be quite different among catchments and may influence river forms and processes in different ways in different catchment environments. Thus, the identification of possible changes in controlling variables forms a basis for the assessment of current and past conditions, as well as for the prediction of future scenarios. Changes through time can be investigated in their historical context, for instance over the last century for changes at catchment to reach scales. A resolution of about 10 to 20 years is suited to the reach scale and below (Figure 3). Proper characterization of historical and contemporary changes at the relevant spatial scales is essential for diagnosing river problems and designing sustainable restoration measures. 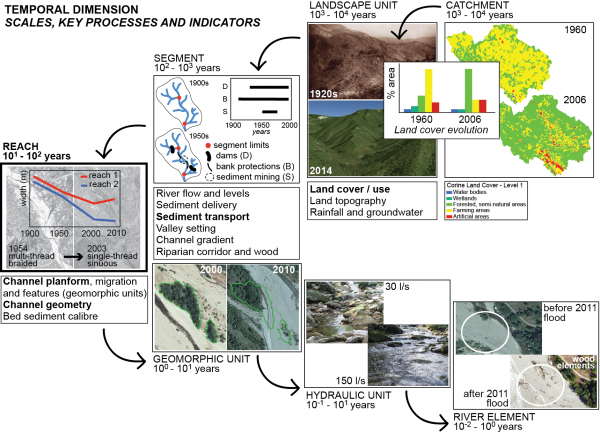 Figure 3 illustrates the changing processes monitored and their temporal scale for each spatial unit in an example catchment. Land cover change over more than 50 years is shown at the catchment scale. Significant land cover and management alterations have occurred over this period throughout Europe, and have affected runoff production and consequently the entire cascade of river processes that drive river hydromorphology and features within the catchment. At the landscape unit scale, afforestation of a valley is illustrated. Extension of forest land cover stabilizes hill slopes and decreases runoff production, leading to a reduction in soil erosion and the supply of sediment to river channel. Such changes in the delivery of water and sediment lead to changes in the size and the form of a river. Sometimes even the type of river is changed. The segment scale illustrates an increase over the last century in infrastructure that directly impacts the river and it processes. Dams disconnect the down-river movement of sediment, often leading to a sediment deficit downstream the dam and degradation of the river bed. Bank protection limits lateral movement of the river and its capacity to erode bank sediment.

The effects of the installation of river infrastructures that decrease sediment supply and constrain river channel movements are most clearly seen at the reach scale. In the example river reach, a river that was multi-thread braided in the 1950s has been transformed into a single-thread sinuous river accompanied by a severe reduction in the width of the active channel. Changes are also observed in the geomorphic units, with encroachment of vegetation incorporating an island into the floodplain within a period of ten years. At the hydraulic unit scale, the example illustrates the impact of changes in river stage on unit character, even when the river channel form has not changed. At the river element scale, the example shows significant changes in the type and distribution of elements present as the result of a single flood, which has redistributed them within and between river reaches.

The integration of spatial characteristics and their changes through time allows the investigator to identify which spatial units and temporal scales drive the relevant forms and processes. The hierarchical framework provides an integrated and scientifically sound basis for diagnosing causes and effects of the hydromorphological process cascade (see Stage_4). This process-based characterization is suitable to support river restoration from basin-scale planning to the implementation of local projects.