Difference between revisions of "Olivenza. Hydrological and Forestry Restoration of the Olivenza riverside, 2ª phase"

This should not figure here as a an ecological and hidromorphological restoration project. In fact, the project was design for flood protection, pursued by the construction of levees and weirs.
Some of the measures can improve the structure and composition of the riparian vegetation: silvicultural treatments (clearing, pruning), elimination of invasive species and plantation of native species.
To increase the hydraulic capacity of the river, as a way to prevent floodings, the woody debris have been removed from the channel, what can be considered an innapropiate measure, but understood if we consider the social context and the point of view of the farmers who cultivate at the floodplain. Also, 4.900 m3 of sediments were removed from the river channel.
The engineering measures considered for flood protection include transversal hydrological correction works, with the construction of five weirs (0,6 m height) and longitudinal spots over 550 m. 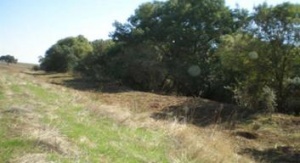 The General Department of Biodiversity of the Ministry of Environment made a report the 11th July of 2005 where declared that the implementation of the project would increase the artificiality of the flow regime, affecting, at the end, on the Guadiana river, where are located habitats of community interest(Pyro pastures bourgaeanae-Quercetum rotumdifoleae and Salicetum salvifoliolambertinae).
The mitigation measures proposed by the General Department of Biodiversity were accepted by the project promoter, reducing the potential impact over these habitats.