REFORM analyzed a large-scale data set, but no effects of hydromorphological degradation on indices based on algae (phytobenthos) were detected. However, indices developed to assess eutrophication stress appear robust to hydromorphological alteration. Examples are the Trophic Diatom Index (TDI) and the specific pollution sensitivity index (SPI). Analysis of a spatial dataset showed a particularly strong relationship between fine sediment and the diatom community composition. This might suggest that diatoms could be used as an indicator of fine-sediment stress. In contrast to this finding, experiments showed that phytobenthos community composition was primarily impacted by soluble reactive phosphorous concentration. Fine-sediment treatment did not significantly impact on either chlorophyll-a concentrations or ash-free dry weight (AFDM), suggesting that algal growth was unaffected.

Trait characteristics of macrophytes changed significantly in response to hydromorphological degradation in small streams. Species growing from single basal meristems declined. Species with a high overwintering capacity increased. However, with the exception of the trait heterophylly (the ability to have different types of leaves above and below the water), impacts of hydromorphological stress could not be separated from eutrophication. More traits were specific to eutrophication, which could aid in the diagnosis of main stressors in multiple-stress systems. Despite their importance in some river types, macrophytes have limited suitability as a general indicator for the range of European river types. Development of a new trait-based metric might make them suitable for lowland rivers.

The MESH and LIFE metrics were specifically developed to be sensitive to hydrological stress (low flow). An analysis of stations with paired measurements of hydrology and the biological quality element macroinvertebrates showed, however, that these metrics were not particularly sensitive when compared to other metrics such as ASPT, EPT and SPEAR. The closer a value is to – 1, the worse are the conditions. Values close to +1 indicate little or no stress. It is evident from the table that the metrics are almost equally sensitive to hydrological stress and other stresses. This questions our ability to make diagnostic metrics with the necessary sensitivity towards hydromorphological stresses and other individual types of stress.

Which biological quality elements can be used? 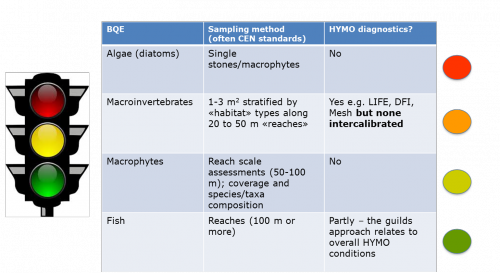