The Spanish energetic policy in the beginning of the economic and industrial development of the country centered great part of its objectives on the usefulness of the hydroelectric potential of the mayority of the Spanish rivers. In this context, between the years 1950 and 1990, 939 were built in the whole world, being 46 them are in Galicia.
The Frieira dam was built in 1970 and as in the design of other big dams, regardless of environmental criteria. As a consequence, the dam has brought substantial negative efects. The "barrier effect" causes the interruption of the longitudinal continuity of the Miño river and the fish migrations.
The Frieira dam is the first obstacle of the river, as it is located at aproximately 68 km from the mouth to the Altanlic Ocean. Upstream, the continuity of the Miño river is interrupted by four more dams that stop the fish access to headwaters: Castrelo, Velle, Peares and Belesar. There are tho rivers upstream the Frieira dam, the Avia river (37 Km of main course, with an area basin of 643 Km2) and the Arnoia river (58 Km of main course and 923 Km2 of basin ) and other three rivers of less entity (Deva, Cierves and Brull) that could provide refuge and spawn areas to the migratory fish.
Anyway, the Avia river is regulated by the Albarellos dam [1] and the Arnoia river has four transversal barriers[2] (small hydroelectric) some of them with fish passage (so far we do not have reliable data).
The Frieira dam is 33 m high with 194 m long at the top. It has a storage capacity of 44,41 Hm3 and a surface of 466 ha. The main effect is on the migration of fish species as atlantic salmon (Salmo salar), eel (Anguilla anguilla) , "reo" (Salmo trutta), lamprey (Petromyzon marinus) and "sábalo" (Alosa alosa). It has also negative effects on the populations of the naiad (Margarita sp.) and fish predators as the huron and the otter. the result is a loss of biodiversity a decrease on fish population, and a impoverishment on the social and economic benefits of the river and the activities related with fish (mainly, recreational fishing).
Previously, a passage for eels was built, with ineffective results.This project was conceived as pioneer and innovative in the context of environmental restoration, with the aim of recover the aquatic habitat and fish populations at the low Miño river.

For restore the continuity of the Miño river, different alternatives were considered. Finally, the construction of this elevation system was choosed.The project consisted of three well differentiated parts: the scale of troughs in the lower part, the elevation system and a restoration fish channel in the upper part.

Since the beggining, there were some arguments against this election. The construction of this elevation system did not mean a big increase in the aquatic habitat disponibility, as there are more dams upstream, and the tributories that would be gained may not be considered excellent. Also, the design of the project never took into account the movement of youth and catched fish downstream. 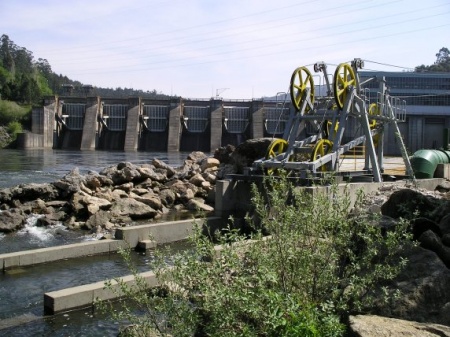 The scale of troughs 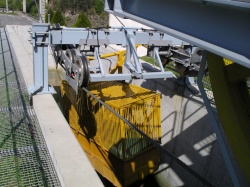 The basket where the fish are transported. 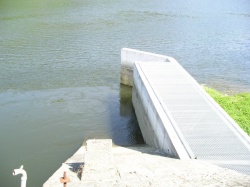 The end of the restoration channel into the dam

The project expected succesful results in a mid-term period (10 years). It was planned a program for monitoring the effectiveness of the project consisting in a video system for counting at the unloading area and inventories at the subasins of the river Avia and Arnoia. The indicator species would be salmon, reo, alosas, and lamprey, with the following results[3]:

So far, there are not available data about the evolution of the target species´populations. The number of fish that have moved upstream is unknown until the moment.

The aims of this project were focused on the ecological status of the fish populations, not on recover the hydromorphological quality of the river. A second project, that is being done now, is dedicated to the contribution of the ecological flow for the lower Miño (about 60 - 80 m3/s.

In reality, the building work turned out to be more expensive than it was planned due to damages produced by flooding events and the caused damaged, and to adjustments in the aerobicable transport system. another problem were the poaching (even some people came to catch fish in the elevation basket!). The monitoring system could not be installed. During the period of time the elevation system was working it wasn´t done any inventory(the works were paralized for a period of time, and in the end, canceled)[4]. So far, no report has been sent to Brussels, and the effectiveness of the project hasn´t been evaluated.

The total budget of the project was 1.278.875 €. The UE confinanced it,with a contribution of 291.342 € (27,5 % of the total costs). This amount increased due to unforeseen costs (repairs, maintenance).
Apart from the environmental benefits,the socioeconomic benefits of the project would be related with activities such as the sport fishing, the traditional fisheries, and then, with an increase of the tourism, and the rural development.

From the study of environmental flows for the lower Miño made in 2000 (agreed by Fenosa and the Portuguese administration) a central was designed and authorized at the base of the dam to release environmental flows (60 - 80 m3/s). The installation of a Borland floodgate for enable the movement of fish was included in the Environmental Impact Statement. This suposed a new oportunity for solving the problem of river fragmentation. Another alternative studied was the construction of a elevation system and a scale for eels. Finally, a fish catchment was the solution adopted (even the transformation of the elevation system previously built into another catchment system was proposed). The fish will be distributed over the Miño river basin, in other basins,or destinated to fish farms depending on the case. The building works are at the final stage. Again, the downstream migration has not been considered.