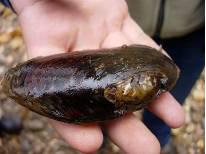 specimen of naiad from the Negro river.Image from Rodriguez et al.,2008

The Negro river drains the the area located at the south of Sierra de la Cabrera, of siliceous substrate (gneiss, slate and quartzite). The climate is meaditerranean with atlantic influence. The vegetation at the basin is composed of Pinus sylvestris, Pinus nigra and Pinus pinaster, although the potential corresponds to Quercus pyrenaica, and in the lower areas of the left bank, a dry series of Quercus rotundifolia. the intensive livestock farming, the use of fire and the deforestation of the basin led to the curent state of the vegetation. The riparian vegetation in the middle and lower sections is dominated by a siliciphilous riparian geomegaseries of Alnus glutinosa, while the upper sections dominated by Salix salvifolia and other willows which, together with the alders, jointly dominate some middle and lower sections. Important riparian formation of Populus tremula on the lower section. State of conservation: in the middle and lower areas these riparian strips coincide with farmed alluvial plains, conserving narrow galleries which in some places are highly degraded and in others have even disappeared (Rodriguez et al.,2008)[2].

In hydrographic terms it belongs to the Duero basin, being a left-bank tributary of the river Tera, which in turn is a right-bank tributary of the Esla, subsequently flowing into the Duero via its right bankThe average flow is ususally less than 0.6 m/s, of clear waters as the suspended matter normally do not exceed 2 mg/l. However, forest fires and some management practices of the watershed, involve the sediment scouring, resulting in an increase of suspended solids and a noticeable loss of water quality.

The total or partial removal of riparian vegetation at some reaches has caused the loss of natural channel morphology. The transformation of the riparian forest and floodplain into flood meadows is another reason of morphological alteration.
There are various impoundments at the river for different uses(mills, forges, irrigation pipes,etc.)increasing the solids contribution and the interrupting the longitudinal connectivity. 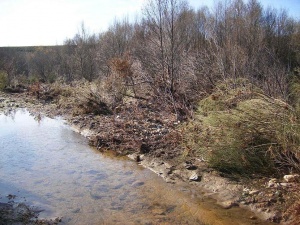 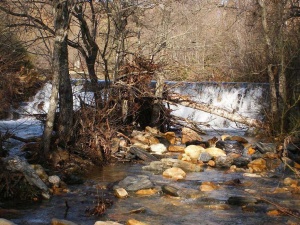 Presence of transversal barriers at the channel.

The project aimed to:

The main measure is directed to improve the longitudinal connectivity by the permeabilisation of 11 weirs, incorporating fish passing structures. The weir of Rionegro del Puente, located before the Negro river flows into the reservoir of Nuestra Señora de Agavanzal, is kept in order to prevent the entry of invasive species like Lepomis gibosus from the Tera river.
The second measure for recovery the target species is the spawning habitat improvement through the installation of spawing structures for facilitate trout breeding and the restoration of former spawning areas (channel morphology rehabilitation and sediment removal), today disappeared due to the fines deposition. The undesired sediments are originated at hillslopes affected by fire, forest works, earth movements in infrastructure works, etc. The adaptation of waterwheel lateral channels as spawing ares is also planned.
The improvement of water quality is achieved in two ways: improving the purification of urban waste and by hydrological-forestry actions. The last consists fundamentally in the creation of Buffer Strips for reduce the sediment input from the hillside.
The riparian zones will be revegetated with native species by plantation and sowing. Complementary silvicultural treatments will improve the structure, composition, and health status of the the riparian vegetation as well.
Other measure is the improvement of the public use and the hydraulic heritage through the rehabilitation of old waterwheel of ethnographic interest.
As the naiad population is old and has breeding problems, a captive breeding program is developed parallel to the aquatic habitat improvement. A monitoring program will be working during the whole restoration process (expected to last 38 months) and some time after its ending, for check the good preformance and the effectiveness of the planned measures.

a monitoring program will be active during the whole restoration process (expected to last 38 months) and a period of time after the ending of the woks. The aim is to check the correct performance of the works, their effectiveness, and modify the initial design of the project if necessary.

In the Douro basin, recent studies determined the presence of several freshwater bivalve species, such as the naiad Margaritifera margaritifera or from the family Unionidae.
The interest of this species and the degree to which it is threatened led to the development of a LIFE programme for its conservation in the Zamora SCI (LIFE03-NAT/E/000051) promoted by the Regional Environment Department of the Regional Government of Castilla y León, and supported and cofinanced by the Ministry of the Environment of the Government of Spain.
Work was carried out between the years 2003-2007 by specialised personnel who assessed naiad populations (densities, composition and abundance) and implemented actions for the conservation of this species. The Negro river´s naiad population, are the best conserved in the Duero basin, although it is found highly aged (60-80 years old) and fragmented.
The common trout, which is parasited by the larva phase in a complex biological cycle.The naiad larvae need to be attached to young strout guills for survival.