The Velderberg project was the first in a series of restoration projects aiming at restoring the river Regge over its entire length, which has been channelized and dammed already in the 19th century. The site was restored in 2006 over a length of 1.4 kilometres. Two old meanders were connected to the channelized riverbed. Subsequently, the latter was dammed, only acting as a bypass during peak discharges. The new meandering channel is less wide and more shallow in comparison to the former main channel, improving instream conditions for biota through an increased current velocity. Furthermore, land use of the floodplain was changed from agriculture to nature, embankments were lowered and an underwater weir has been built to prevent bed erosion.

The river Regge flows through the province of Overijssel, The Netherlands, and has a total catchment area of roughly 800 km2. The source of the river is situated southwest of the village of Diepenheim, from where its flows northwards towards the river Vecht over a length of approximately 47 km. Near the town of Ommen it joins the river Vecht. The restoration site Velderberg is located near the village of Hankate, just north of the crossing of the Regge and the Overijssels Kanaal in the lower course of the river (Beneden-Regge). The Regge is a low gradient (height difference 50 m) slowly flowing lowland river, with a mean annual discharge near the study site of 4.2 m³/s.

Historically the river was a free flowing shallow lowland river which meandered through a landscape containing marshes, wet meadows and sandy levees. To facilitate shipping towards the Lake Ijsselmeer, from 1848 on the river was straightened by cutting of meanders and the river channel was deepened and widened. Dams were built to be able to better regulate flow and the floodplain was embanked to protect the adjacent lands from flooding. In 1935 the river was almost completely channelized, reducing its length from roughly 70 km to 50 km. Most old meanders in the (former) floodplain were filled up to make room for agriculture. As a consequence, natural flow dynamics and with that its associated morphological processes were lost and current velocity decreased substantially. Biota characteristic of lowland rivers and natural floodplains disappeared almost completely.

In 1998 a re-naturalisation plan for the entire river, the ‘Reggevisie’ was launched by the local water authorities (Waterboard Vechtstromen, formerly Regge en Dinkel) which aimed at: (i) reintroducing river dynamics, (ii) creating more space for water buffering during peak discharges, and (iii) to facilitate nature development in the floodplain of the river. Another goal was: (iv) to make the river more attractive from a recreation perspective. The study site, the Velderberg, was the first in a series of restoration projects executed of the more than 30 km of river under restoration (see figure below).

In the beginning of 2006 two old meanders were reconnected to the channelized riverbed and the latter was dammed by low weirs, only acting as a bypass during peak discharges (see figure below). The new meandering channel is less wide and more shallow in comparison to the former main channel, improving instream conditions for biota through an increased current velocity. Furthermore, land use of the floodplain was changed from agriculture to nature and embankments were lowered and moved to allow inundation of the floodplain. Subsequently several other meanders owned by the nature management organisations Natuurmonumenten en Landschap Overijssel were excavated and reconnected.

No clear, measurable objectives have been set. 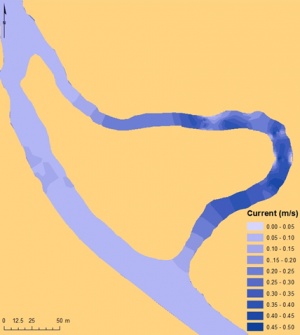 Remeandering resulted in a situation with a stagnant channel blocked by weirs (mean velocity 4.0 cm/s, except during high flows) with a homogenized depth (mean 1.4 m) and width (22.8 m, standard deviation 0.6 m), and the meander, with much more depth variability (1.2 m, standard deviation 0.6 m) and higher average velocity (22.8 cm/s) (Figure 3). Due to the regeneration of the natural flow, side bars and pools developed. Most of the right bank (the eroding shore of the meander) turned into small eroding cliffs with short widths and steep angles; this configuration mirrors the opposite effect from the left shore, where higher sedimentation rates (especially at the bending) lead to the formation two side bars, the widest of them in the apex of the bend. The channel morphology in the meander differs significantly from the unrestored reaches. For example, a channelized reach 4.2 km upstream from the restored reach which has not been modified since 1935 has much larger dimensions (1.9 ± 0.5 m deep, 26.1±1.6 m wide) and a low current velocity (5.9 cm/s) and a bottom substrate consisting mainly of organic matter and silt.

Vegetation: Directly after restoration (2006-2008; Medenblik 2008) the vegetation consisted primarily of pioneer species and species characteristic of disturbed conditions. In 2012 species richness of macrophytes was higher in the restored reach (36 species) in comparison to an upstream unrestored reach (18 species). Most species occurred on the river banks. Callitriche sp. and Potamogeton natans were the aquatic species found in the restored section, Callitriche sp., Lemna minor, Nuphar lutea and Nymphaea alba in the unrestored section.

In addition to the hydrological and biological objectives, the project specifically aimed at the recreational value of the area. Recreation facilities such as a new walking bridge hiking and cycling paths were realized (de Boer & Bressers, 2011).