The Grote Nete is a 44 kilometre long river that has its source north east of the village Hechtel and confluences with the Kleine Nete before ending in the river Scheldt.

The restoration plan of the Grote Nete is part of the large Sigmaplan, a flood defence plan covering a large part of Flanders. With the increased risk of substantial flooding due to climate change, the Sigmaplan was developed to implement flood reduction measures combined with improving the ecological status of the floodplains. In this project, ecology and flood protection are equal in priority. The restoration plan is divided in three subprojects, with Tussen Hellebrug en Herenbossen as largest project. The two other projects are Ter Borght – de Merode and Het Zammelsbroek.

The Grote Nete has been normalised to improve the discharge and to gain extra land for agriculture and urbanization. Levees were constructed to protect the newly gained lands from flooding, but they have cut off the floodplain from the river. These pressures have deteriorated the riverine ecosystem and wetlands near the river.

In the Sigmaplan, the specific objectives for ecology are based on several target species of bird and mammal. The habitats restored and/or created by the measures have to be suitable to facilitate breeding pairs or viable populations. Other target species, mainly fish species, are expected to improve because they live in the required habitat of the main target species.

The main target species consist of:

The criteria for success are all related to the main target species. The created habitat has to facilitate: 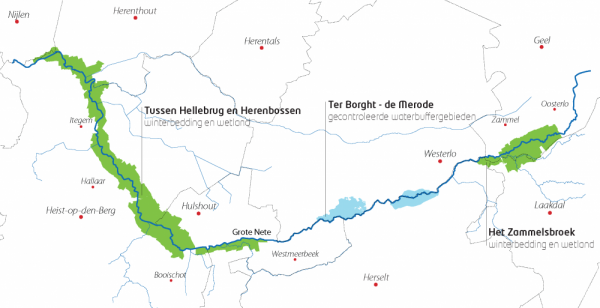 To reconnect the floodplains with the river, the summer dikes are locally lowered and in 14 stretches the main channel is made shallower. This increases the groundwater level to improve the abiotic circumstances in the floodplain. The thresholds that are placed to make the channel shallower will be designed to be a spawning ground for fish. In the floodplain, agricultural or recreational infrastructure and exotic species are removed and converted into wetlands and backwaters. Where possible, side channels that are now blocked by weirs will be made open to make fish migration possible. Old meanders and backwaters are restored to function as habitat. To protect the properties and people outside of the project area, the winter dikes are strengthened. The complete list with measures of all sub-areas are described in the Natuurontwikkelingsplan Sigmaplan – Inrichting Grote Nete versie 2.

A basic baseline study has been preformed to determine what habitats and target species are present. The hydrological baseline for ground- and surface water has been measured and modelled.

When the project is finished, continuous monitoring of ground- and surface water is conducted. Monitoring programs to assess the development of the preferred biotopes and species of fish, birds and macro-invertebrates are planned. The exact time scale and planning is still in progress.

The measures will improve the ecological status of the Grote Nete valley. Wetlands will return and improve in quality due to the higher groundwater level in the project area. The valley will have more room for water retention during high water periods and the hydrology of areas outside of the project area will not be affected. Municipalities see opportunities for recreation, since the natural areas will be more attractive for walking and cycling, but recreation will be limited in the project area to keep disturbances to the habitats limited. 200 hectares of agricultural lands have to be removed, but the negative impact has been limited to a minimum by cooperation with the farmers to design plans that affect as little land as possible.

As the project is in progress in the Environment Impact Assessment phase, no responses on the measures can be described.

Cooperation with stakeholders is an important pillar in the Sigmaplan. In the planning phase, a wide variety of experts, for example ecologists, landscape architects and social scientists are involved in the plan making. Representatives of the local community and land users are also part of the work group as experts to give locals the opportunity to participate in the plan making. Issues and complaints from stakeholders are resolved on individual level. The stakeholders are also engaged in the implementation phase in structural meetings.

In the later implementation phase, the newsletters function as information source of the projects. Structural meetings with the work group remain to discuss the progress.

The Sigmaplan is a national project and is funded by the National government.