The analyses undertaken suggest that other stressors, such as for instance eutrophication, are stronger drivers of community changes. This finding, however, is most likely also related to the quality of the hydromorphological assessments. In most of the larger data sets these assessments were fairly superficial. For instance, phytobenthos and macroinvertebrates are usually sampled at a relatively small scale and often on specific substrates, making any linkages to hydromorphological degradation on larger scales spurious. 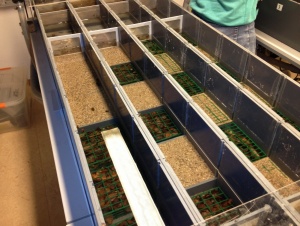 REFORM used indoor experimental channels to examine the effect of substrate complexity on nine species of caddisflies (Trichopteran). Emergence success, defined as the number of larvae that became adults, was reduced for some species if the channels were uniform with little variation in substrate types, mimicking the conditions in a channelized river bed.

Experimental studies in REFORM showed that substrate patchiness and coverage with fine sediments influenced macroinvertebrate populations. This finding could be used in the development of indicators, but also demonstrates that the lack of sensitivity in samples from field sites might be explained from incomplete measurements in routine monitoring programmes as well as deficiencies in the currently used hydromorphological assessment schemes. Standard monitoring thus fails to register elements that are important for in-stream biota. When using controlled experiments at small scales the impacts of hydromorphology and fine sediments become more clear-cut for macroinvertebrates too. Moreover, previous detailed field studies have shown that seemingly similar habitats can differ markedly with regard to biota. For instance, suitable habitats might not be colonized due to dispersal limitations. Scales of sampling thus present a core issue in assessing the influence of degraded hydromorphology.