This project is part of the National Strategy for River Restoration developed by the Spanish Ministry of Environment and in this case, designed and implemented by the Confederación Hidrográfica del Tajo. Between 1985 and 1986 a viaduct for the N-520 highway was built over the Tiétar River. At the same time, a weir was constructed to protect the pillars of the viaduct. This mass concrete weir has a lenght of 120 meters and is 2 meters high. There are two drains at the bottom of the weir by which fish can not pass due to the great hydraulic power (> 150 watts/m3). Thus, cyprinid populations have seen reduced their chances for migrate upstream. The weir is also an obstacle for the transport of sediments, being altered the river morphodynamic at this site. To restore the longitudinal connectivity of the river without compromising the stability of the viaduct, a fish ramp was designed.

The Tiétar River, one of the tributaries if the Tajo River, has a basin area of 4459,1 km2 and a lenght of 150 km. The gentle relief and the contribution of meltwater from Gredos´ mountain range makes the river wide, shallow, and braided. From its source to the Rosarito dam (24,5 km downstream the project site), the river is not regulated, and the flow is characterised by a natural hydrological regime. The river has a high charge-sedimentation capacity, and it transports materials of differnt granulometry from Gredos granite source reaches. Morphodynamic processes originate the formation and evolution of bars, mostly longitudinal and oblique to the flow direction. The vegetation has colonized the bars with more stability. River dynamics have a good functioning due to the hydrological regime naturality and the sediment supply. At the project site, longitudinal connectivity is interrupted by the presence of the weir, and the hydrological, hydraulic and morphodynamic behaviour of the river has been modified.

The riparian corridor is continuous and with good connectivity. The adjacent land has not suffered excessive human influence, and consists mainly of pastures, grassland, Mediterranean sclerophyllous shrubs and dehesa (rangeland of Quercus ilex for livestock farming). The riparian vegetation is composed by a mixed forest of willows, ash, poplar and alder in good condition. The wildlife linked to these ecosystems include endangered species such as the Imperial Eagle (Aquila adalberti), Bonelli's eagle (Hieraaetus fasciatus), black stork (Ciconia nigra),also giving shelter to mammal populations of interest, such as the otter (Lutra lutra), the Cabrera vole (Microtus cabrerae) and especially, the Iberian lynx (Lynx pardina). Among the fish species, there are populations of cyprinids of interes (Squalius pyrenaicus, Squalius alburnoides, Chondrostoma polylepis, Barbus bocagei, Chondrostoma lemmingii), Cobitis paludica and Anguilla anguilla. Some of the mentioned species are clasified as vulnerable by the Ministry of Environment´s Biodiversity Inventory of 2008. There are exotic species like Gambusia holbrooki and Carassius auratus. The presence of eel is due to restocking releases, done during the last 10 years. It is interesting to point that downstream the rosarito dam, and until the Tajo drains to the Atlantic sea, there are other dams and weirs that mean an obtacle for the migration of the eels to the sea, unless each of them are correctly permeabilized.

The protection of the viaduct´s pillars was the main reason why barrier removal was discarted since the first moment. In the Project report there is no reference to the study of alternatives (e.g. pillars´reinforcement) that could make possible the elimination, partial or complete, of the weir. a traditional fishway had require a high number of steps due to the lower dive ability of most of the fish species. The visual impact was the reason for reject this option. Also, the presence of eel and its no dive ability required the construction of a ramp. An acumulation of boulders upstream the weir inspired the design of a structure that imitate somehow this morphology (the question is, is this acumulation natural or due to the weir?) The designed structure has a lenght of 150 meters, a slope of 0,084 % and sinuous planform. The hydraulic study was based on the average flow for the months of May and June (spawing period of the cyprinids), respectively 8,14 y 7,61 m3/s. the calculations hsowd that the minimum flow for these months was guaranteed. Stream power has to be lower than 150 W/m3 and the velocity between 2 y 2,4 m/s to enable the movement upstream of the cyprinids.for the ramp to be effective, the maximum flow should be limited to 4,6 m3/s, with an elevation of water 1 m above the slope at the entrance to the weir. Both values for the months of spawning are higher, so it was necessary to make a window to drain the excessive flow. Three questions about this fish ramp are: is it effective the drainage window? and then, isn´t it excessive the stream power and velocity even if boulders and stones are placed in the channel to increase its roughness? If the ramp enables the migration of the eels upstream, can they migrate downstrean to the sea afterwards?

Fish population monitoring before the implementation of the project is based on the biodiversity Inventory of the Ministry of Environment and information provided by the Wildlife Section of Junta de Castilla y León. The effectiveness of the ramp is going to be monitored at present, to guarantee its correct functioning.

The most important restriction for the project design was that the stability of the viaduct´s pillars couldn´t be endangered. For this reason, the elimination of the weir (partial ot complete) was discarded in first place, as the weir controls stream energy. The total budget of the project was of 304.957,04 €. 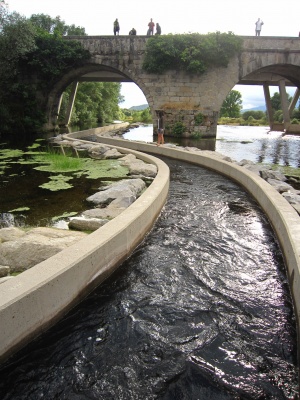 view of the fishramp, upstream the weir. 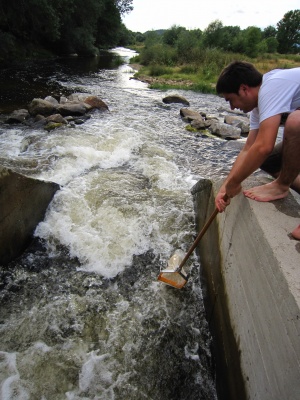 The beginning of the ramp, downstream the weir 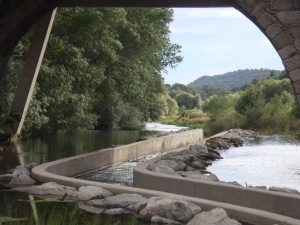 Another image of the fishramp

The source of all data ar the Project report and Appendix.
Doubts and questions about the effectivenes of the project are personal opinions that have to be contrasted with scientific evidence.