The Spanish toothcarp is a endemic fish of the Spanish Mediterranean coast, typical of changeable environment with still shallow waters, as river estuaries, swamps, coastal lagoons and lowland water bodies, due to its capacity to resist a wide range of salinity (euryhaline) and temperature (eurythermal). However, it has been displaced by invasive exotic species as Gambusia holbrooki (Eastern mosquitofish), and relegated to saline or hypersaline areas where mosquitofish can not live. The destruction of their natural habitat (see Extra background information ) is another cause of regression, that in addition accentuates the isolation and division into subpopulations.

Attention: the source of the following text is the Chícamo river project web site[1]:


The Chícamo river is located within the SCI of the Chícamo River (SCI ES6200028) . There are 8 habitats of community interest. The Chícamo River rises near Macisvenda, a small village belonging to the Abanilla municipal district, one of the most arid places in Murcian Region, which gives this scenery a special peculiarity.
It is a permanent flow river stretch with related temporary watercourses and wetlands. You can find different community plants such as Nerium oleander (Rosebay), Tamarix boveana and Tamarix canariensis ; also, some endemic plants as Sideritis leucantha and Thymus moroderi .
In terms of fauna, stands out Spanish toothcarp ( Aphanius iberus ), the only presence of this species in continental courses in Murcian Region, and the invertebrate Coenagrion mercuriale (Southern Damselfly), both including on Annex II of Directive 92/43/CEE; as well as Himantopus himantopus ( Black-winged Stilt) , included on Annex I of Directive 79/409/CEE.
The Chícamo River source is a natural river stretch with a length of bed fewer than 3.5 km , 1.5 m of average width and no more than 75 cm of depth.

The whole project comprises actions at different places of Murcia: Ajauque's wetland and “Rambla Salada”, Marchamalo” saltflats, "Rasall" saltflats and the he Chícamo river. While the actions at the Chicamo river and Marchamalo saltflats were aimed to increase the physical habitat availability, the Rambla Salada´s complex rehabilitation was destined to create a centre for re-establish and semi-captivity control of a “Chícamo” River stock population, and the restoration of the “Rasall” saltworks aimed to re-establish a Spanish toothcarp population that belongs to the genetic stock who lives in “Marchamalo” saltflats.[2]
Particularly, the measures at the Chícamo river consisted in[3] : 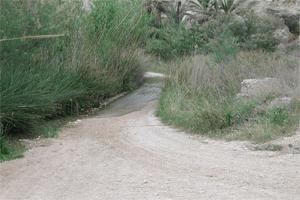 One of the tracks that crossed the river, before the restoration 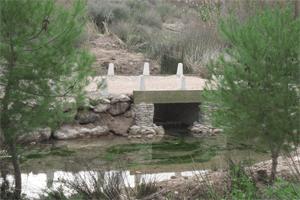 One of the new bridges, and an artificial pool 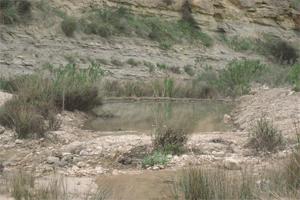 One of the new pools at la Umbría weir 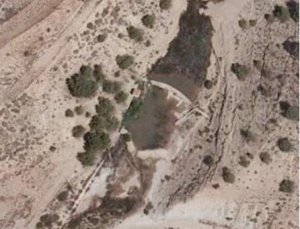 For more images of the project, visit the web site:
http://www.carm.es/siga/europa/life0035/ingles/en1024768/f-chicamo.htm

The study of the population evolution done at two sites near the Chícamo river´s source revealed different conclusions[4].

Increasing the habitat availabe seems to be a necessary measure for the conservation and development of an endangered species like the Spanish toothcarp. The restored sites showed an increase in deeper areas (augmentation of the average depth) and in the area covered by water (augmentation of the distante to the shore) as a result of the restoration measures. The establishment of semi-artificial pools or ponds with continuous circulation within the main channel has proved to be a suitable tool to expand the aquatic habitat. However, this tool needs the complement of invasive fish population control (gambusia) for optimum results. 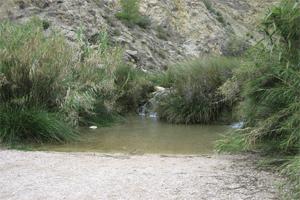 The main pool before the restoration 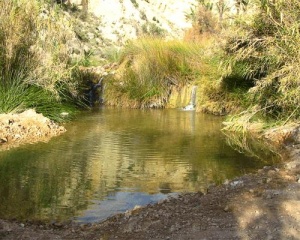 The main pool after the restoration

Before the implementation of the project, the initial status of the Spanish toothcarp population at the Chícamo river was evaluated. For that purpose, the area with presence of the fish was determined in the reach from the river source until the locality of Mahoya.The location was specified in a 100 x 100 m UTM grid. the results of the initial evaluation revealed the presence of Aphanius iberus only in 4 cells of the grid, located by the source of the river and near the Cajel dam.
During the implementation of the project the spatial and temporal evolution of the fish population abundance and structure was studied, and so physico-chemical conditions of the aquatic habitat, the evolution of habitat avaiability, the fish habitat preference (depth, substrate granulometry), and the evolution of invasive species abundance (Gambusia holbrooki, Procambarus clarkii) in response to control measures. There is also a post-release Monitoring Program for evaluate the success or failure of the population reinforcement through the release of captive-bred specimens.[5]

Chícamo river permanent flow comes from the Quibas free aquifer, which has 270-310 km2 and is feed by rainwater infiltration. Only 10 km of the river maintain permanent or temporal flow, since the river nature is truly sporadic. In addition,the river stays dried downstream El Partido (at 7 km from the source), where a weir diverts the water for irrigation. Only in those places where the water from the aquifer comes up, the river regains flow, but with a higher salinity.
The Chícamo was used for irrigation since Roman times, but the aquifer became overexploited from the 70´s. In 1973, even if the overexplotation was already known, the groundwater flow followed the natural tendency. In 1975, a division of the aquifer into two subunits was detected, coinciding with a maximum in the extraction, estimated in 25 Hm3/year. The magnitude of the extractions oscillated much between 1970 and 1990, although the amount of water extracted has always exceeded the aquifer natural rate of recharge (estimated in 2,5 Hm3/year for 1987)[6]. In 1989 the groundwater extraction was calculated in 5,98 Hm3/year, and the natural discharge into the river was estimated in 0,8 Hm3/year (1987). According to the available information the natural recharge is estimated in 5,5 Hm3/year, the natural discharge in 1 Hm3/year, and the extractions in 7,5 Hm3/year (1997)[7]. The piezometric levels descended around 120-130 m between 1970 and 1990. During the last years the levels have experienced a slight increase, but still the aquifer is fragmented into several subunits that function independently. The reduction in water extraction is due to the increment in the cost of pumping and the deterioration of the water quality. The aquifer has an average conductivity of 7,074 mS/cm (ranging from 2,200 mS/cm and 24,100 mS/cm) and an average value for nitrates of 17 mg/l (0-93 mg/l)[8]. It also suffers natural contamination of Chloride, Sodium, Magnesium, Sulphate and Calcium originated by saline materials. Nowadays the whole aquifer is affected by salinization and overexploitation, and the process for declare it offcially has been initiated by the Confederación Hidrográfica del Segura. 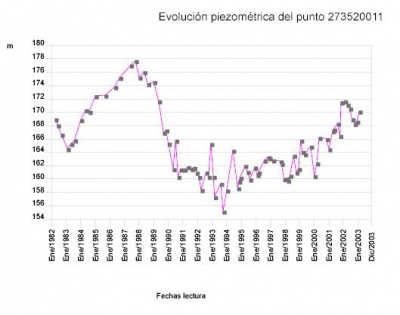 Evolution of the piezometric level of the Quibas aquifer at the Collado del Rey sector. Cource: IGME (www.igme.es)

Since 1989 neighbours and ecologist protested about the decline of flows. In the opposite side, the farmers claimed the river channelization for diverts the water from the natural channel 6 km. The last finally happened, leading to the total degradation of the river. In 1994 a flooding broke the channel, making useless the structure and paralyzing the conflict untill 1998, when it was restored.
In 1998 the population of Spanish toothcarp at the upper part of the Chícamo river was discovered. In 2000 it was declared the SCI ES6200028 "Río Chícamo".
In 2004 the European Commission aproved the funding for this project. The actions in the Chícamo river are part of a larger project which pretend the long term conservation of the Aphanius iberus in the Murcian region.
The operational objectives are: [9]

Web site of the Life Project [9]