As part of the “flood protection programme for the Upper Enns River” ecological orientated measures were implemented at the river Enns in the village Aich. Besides several technical measures like a flood protection dam the river bed was widened in two sections both as retention area and for ecological benefits. Bank stabilization structures were removed and for this reason lateral erosion increased and the development of gravel bars was initialized. A new side arm was created which offers diverse instream structures and many different habitat types.

The river Enns has its source in the Radstädter Tauern Mountains in the Austrian federal state of Salzburg. The Enns continues its flow across the federal states Styria and Upper Austria where it joins the Danube after 254 km. At the project site the Enns valley forms the border between the Limestone Alps in the north and the Grauwackenzone in the south. The sub-catchment size is about 800 km² and the average annual flow 21,5 m³/s. Before regulation measures took place on the river Enns this river section was influenced by two tributaries. The high bed load input of the tributaries formed alluvial cones which lead to an increasing slope downstream. The combination of increased slope and high bed load input created locally a braiding river character with gravel banks, vegetated islands and sequences of cut- and slip-off banks.

In the middle of the 19th century the regulation of the river Enns started aiming the expansion of agricultural land use and settlement areas. The river course in the Enns valley was shortened by 18%. 37 meander bends were cut off and the river was straightened. Due to drainage measures in the valley bottom many swamps fell dry. Additionally the Enns and their tributaries are used also for hydropower production.

After heavy flood events in August 2002 plans for a 100 years flood protection for the municipality of Aich were initiated. The aim was to realize an ecological orientated river compatible flood protection programme.

For the protection of the village Aich on the left side of the river an 800 m long flood protection dam was built. In the upper section the bank protection measures were removed on the left bank and the river bed was widened on a length of 80 m. Behind the former shoreline a new 170 m long side arm was created. The cut bank was shaped with biological engineering measures. The estuary of a former side channel of the Enns was transferred upstream into the new side arm. The barriers for fish migration in this former side channel were removed. Downstream of the bridge the river bed was widened on the right bank. Gravel bars were shaped roughly and dead wood structures were initiated. The two river bed widenings offer retention area on the one hand and diverse habitat structures like gravel banks, varying water depth and flow velocity on the other hand. 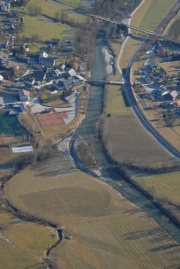 Within REFORM WP4 different organism groups were sampled and compared between the resored and a still degraded site upstream (REFORM deliverable D4.3). Fish were sampled in November/December 2011, and riparian as well as floodplain vegetation in summer 2013. The restored and degraded sites were both dominated by rheophilic species. Brown trout (Salmo trutta fario) was the main species at the restored site, whereas grayling (Thymallus thymallus) dominated the degraded site. At both sites the introduced species rainbow trout (Oncorhynchus mykiss) had a considerable share of all species. The density of small rheophilic fish and the proportion of density of small rheophilic fish were higher at the restored site (REFORM deliverable D4.3). There was a difference in the total number of vegetation units between restored (n=14) and degraded site (n=7). But both sites were characterized by the vegetation units Alno-Padion which is dominated by black alder (Alnus glutinosa) in the tree layer and (Stellaria nemorum) in the herb layer and Salicion albae. At the restored site gravel bars were not vegetated, the riparian banks were dominated by silver willow (Salix alba), purple willow (Salix purpurea) and goat willow (Salix caprea- photo below). At the degraded site the hard wood flood plain forest was often accompanied by the spruce (Picea abies).

Riparian vegetation at the restored section of the Enns river

The project was carried out by the Department of Hydraulic Engineering in cooperation with the Agency for Nature Conservation of the Styrian State Government.

Information events were organized for the local population and information material was distributed.