In the Alpine and lower-mountain regions, many rivers have been widened or re-braided in the last years to restore a more natural planform (wandering or braiding). Channel migration and braiding are enabled within the widened reach, leading to greater structural, hydraulic, and habitat heterogeneity. As with re-meandering, it should carefully be checked if a multiple-channel planform would naturally develop given the present discharge and sediment conditions. Historical data must be used with care, since discharge and sediment regime as well as bank vegetation, which have a strong influence on channel planform and dimensions, may have been altered (e.g. downstream from reservoirs, peak-flows from impervious areas, grazing of riparian areas). Therefore, it is crucial to adequately assess the channel planform and dimensions which can be expected given the catchment characteristics (e.g. grain size, discharge, sediment load, bank material and riparian vegetation). In principle, there are two possible approaches for widening or re-braiding: Creating a wider, shallower planform or initiating natural lateral channel dynamics. 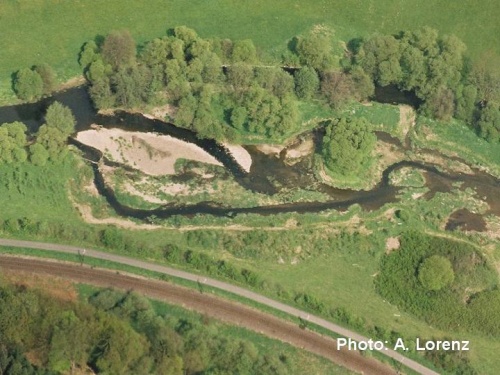 Creating a “braiding” planform: Actively widening or re-braiding usually includes removal of bank fixation, the setback of the flood levees. Although widening intends to increase sedimentation of gravel and the formation of gravel bars, over-widening may result in too low flow depth and velocities and in turn sedimentation of fines and clogging of interstitial spaces. This is especially true for catchments with high suspended sediment loads due to agricultural land-use in the upstream catchment. Some guidelines for dimensioning the widening of rivers are available (e.g. assessing maximum pool depth in the widened reach and at the downstream end) (Hunzinger 1998, 2004).

Initiating natural lateral channel dynamics: Instead of creating a new channel using heavy machinery, lateral channel dynamics can be initiated by removing bank fixation and placement of flow deflectors (“let the river do the work”). However, this “passive restoration” potentially causes high sediment loads in the beginning (which may have negative effects downstream like filling pools) and takes several tenth of years until a wider or braiding planform is reached. Moreover, significant changes in channel planform and a natural braided will not be reached within an engineering time scale in streams with reduced stream power (rivers with reduced peak flows like reaches downstream of dams) or sediment deficits.

The happy medium? Given the problems and constraints of the two approaches mentioned above, a third, intermediate approach would be to create a new channel with a width well below the value assessed based on the catchment characteristics. Since the capacity of the channel is lower than in its dynamic equilibrium state, the following high flows will most probably result in bank erosion and reshaping of the cross-sections. However, sediment output from the restored reach will be considerably less than with the passive restoration approach and a braiding planform can be reached in an engineering time scale.

See problems and constraints of the different approaches mentioned above. Restricted to reaches where lateral channel migration can be admitted (up to whole braiding channel width) as well as frequent flooding. As with every reach-scale measure, catchment scale pressures like urbanization or fine-sediment input may constrain the effect of widening or re-braiding. River widenings are especially successful if the reaches are long, if bedload is high, and if upstream near-natural reaches with source populations exist (Rohde 2005). Widenings are particularly appropriate for the rehabilitation of formerly braided rivers with intact or little impaired bed load.

Largely depends on the land purchase cost and on the approach used (creating new channel vs. passive restoration). Medium cost-effective if land is already owned due to small to medium ecological effect.

Assessing “stable” channel form: As mentioned above, it is crucial to adequately assess the “stable” channel planform (meandering or braiding) and dimensions (mean cross-section width, depth, sinuousity) of a river in its dynamic equilibrium state, especially if the new meandering channel is build.

There are three different approaches, which have several pros and cons:

Pros: Easy to use

Cons: Strictly can only be applied for streams in the same region

Pros: Not restricted to a specific region

Cons: Not fully physically based since all regime models include one kind of “extremal hypothesis” (e.g. assuming that stream power is at its minimum in stable rivers, which are “in regime”, i.e. local erosion and deposition but no net erosion)

Pros: Not restricted to a specific region

Cons: Mean channel width of stable channel has to be known in advance.

Crosato, A. & Mosselman, E. (2009) Simple physics-based predictor for the number of river bars and the transition between meandering and braiding. Water Resources Research, 45, W03424.