Difference between revisions of "Remove barrier"

At present there are many barriers in the rivers that might be eliminated due to their lack of use, obtaining with it the longitudinal continuity of the flows and the connectivity of the fluvial habitat recovery. Barriers are obstacles to the natural flows longitudinal continuity, represented by hydraulic engineering transverse structures, including large dams, weirs, and dikes. The aim of this measure is to recover the continuity of water and sediment flows, and the organism connectivity in both ways, in order to recover the principal attributes of natural functioning rivers. The elimination of these barriers will be possible only in the cases in which the property, the use or the purpose allow it, attending to the in force legislation and to the agreements that could be reached between the social implied agents.

Many of these river transverse barriers are nowadays in disuse, or its use has diminished in intensity or profitability, and the ecological functioning alteration caused is not justified any more, being necessary to check the interest of its maintenance, or the possibility of their removal.

Depending of its height, all dams suppose a more or less impassable barrier for the fish migratory species of the river, and concern the dispersion of the seeds, drift of macroinvertebrates, and transport and distribution of the sediments along the riverbed. To avoid this barrier effect, in many cases it is possible and suitable, to built fish passes, by-pass channels, fish elevators or any other system that is considered to be appropriate. But in many other cases, the most suitable and effective measure will be to proceed to reduce the height of the dam, or even the demolition of the dam, in order to restore the primitive conditions of the river.

The elimination of dams and weirs or obstacles for the pass of the waters and the aquatic organisms is a habitual practice in many countries in order to recover the ‘fluvial continuity’, which is an indicator of the Hydro-morphological quality of the running waters water bodies as Water Framework Directive proposes. In United States an increased experience on dam demolition (International Rivers Network, 2001; Bednarek, 2001; Higgs, 2002) exists, considering that these have a limited life span, and that often the environmental impacts that they generate are not justified by its use or current exploitation.

There are publications and scientific and technical works on barrier and dam demolition where previous considerations necessary are detailed. The dam characteristics and on the effects of the its elimination in the river at short, medium and long term after its removal (American Institute of Biological Sciences, 2002). The techniques for dam demolition or to make the fluvial continuity effective can be very different, and must be designed in accordance with the peculiarities of every dam (size, type, location, etc.), the characteristics of the river and its catchment area and the aims of the demolition (restoration of the river, maintenance of recreative activities, use of river banks, etc.).

Depending on the determining conditions of each dam and fluvial section it is possible to choose for one of the next alternatives:

- To demolish the dam completely, leaving the riverbed as it was before its construction. In this case, it is necessary to use heavy machinery, hydraulic hammers, explosives, etc., that dismantle the whole structure, withdrawing later all the materials and rubbles originated with the respective works. It is recommended in the cases of small dams, land dams, or in natural spaces of high value, where one tries to reach a major level of restoration of the river, being generally the costliest option but that of more complete and ideal results (figure ).

- To break partially the dam, allowing that the water should flow across the opened gaps and that the water does not remain stored upstream. To break the main walls also will be necessary to use heavy machinery or explosives, the dam can be open it in one or in several zones, leaving in occasions in the same riverbed the ruined remains, which are avoided by the waters forming sections of major turbulence. With this option part of the structure is kept, but the connectivity of the habitats along the fluvial continuum is recovered (to see figure ). It is recommended in concrete dams or masonry of major width, where its demolition is expensive, and represents a much more economic alternative, which in some sections can be recommended in the short term, delaying its total demolition for a later period. It has been in use often in the sections where one has tried to support certain recreational activities in the shores of the former reservoir.

- To raise the hatches and to allow the water flow out emptying the reservoir, recovering the continuity of water and sediments upstream and downstream the dam, but without altering the hanging of the prey. This option does not need any type of heavy machinery or work of demolition, and can turn out to be most indicated in the cases in that the dam is having an additional uses (as a bridge and support of a road or railroad). However, for its efficiency it is necessary that the hatches are placed at the level of the current bed, and that have sufficient width to allow the water flow without causing obstructions.

The experience confirms that the way the removal of sediment is carries out, as well as the management of demolition work, has a great impact on performance because it determines how fast the river returns to its normal state early or stay for a long period of time (several years or decades) with the negative effects of the dam for removal (Stanley and Doyle, 2002).

Since the elimination of the dam, positive effects appear as aquatic organisms are able again to circulate through the fluvial corridor. Habitat continuity and connectivity become restored, recovering the possibilities of migration of the existing species that need to move for its reproduction from the low sections to the highest, or vice versa.

The settling of the primitive floodplain species on the zone affected by the dam can be delayed much more than the recovery of fluvial migratory species, depending in every case of the time needed for recovering geomorphic conditions of these reaches, attending to the new flow regime and flood patterns (Shafroth et al., 2002).

Macrophytes: • Increase of reophilic species and the reduction of lentic ones

While the medium and long term ecological benefits for the demolition of the dams are potentially very positive, short-term adverse effects can be expected, especially related to the transport of sediment stored in the reservoir and distribution channel for water down. In Figures 7.5 and 7.6 are some of these effects, considering the time scales to which they may refer. 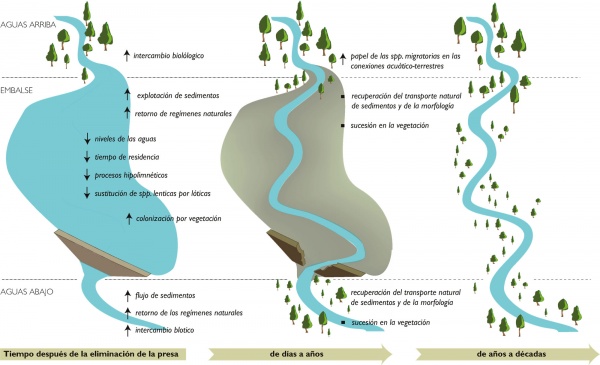 Upstream of the dam, emptying the reservoir generates geomorphologic processes dominated by sediment transport to downstream and causing an evolution of the channel, which will gradually fit into the sediments accumulated in the reservoir. This involves changes in hydraulic variables, resulting in an increase in the slope of the longitudinal and hydraulic power. With the progressive incision of the flowing channel in the reservoir sediments, the water level drops and reduces the moisture of the soil. From starting a new conditions replacement of habitat types and biological succession takes place, both in the channel, banks and riverside areas, which are increasingly closer to the axis of the original river channel.

Downstream of the dam geomorphic processes that appear are conditioned by the response of river sediment supply, which varies in time depending on the magnitude of the flows. The redistribution of sediment across the channel downstream of the dam may cause short-and medium-term damage to the habitat of the bed, taking into account that in the first moments are going to mobilize large numbers of fines that can cover all microhabitats and spawning ground. Field and laboratory observations have revealed that the sediments are distributed mainly by diffusion rather than transfer to water beneath waves or pulses of sediment, which significantly reduces its adverse effects with time and distance the location of the dam removed (Pizzuto, 2002).

American Rivers. 2002. The Ecology of Dam Removal, a Summary of Benefits and Impacts. Washington, DC.

In emptying the reservoir, it must also be taken into account the possibility of any accumulated sediments with heavy metals or toxic substances that have been inert under water, but if they are raerated, they may become toxic and actively assimilated and to organisms. In these cases, the restoration measure will involve the removal of sediment toxic prior to transport to landfill and backhoe, before starting the demolition work or opening of the dam.

Therefore, at a first stage of organization of measure works is necessary to conduct a detailed analysis of the origin and composition of the sediments accumulated in the reservoir, and identify whether there are toxic substances or dangerous for flora and fauna of the River.